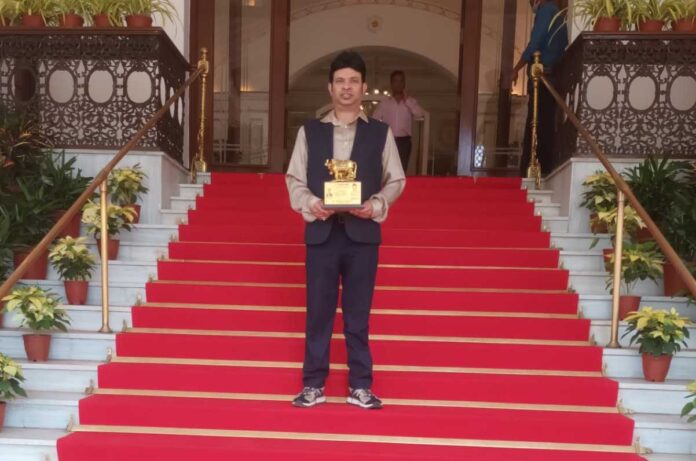 Shantanu Bhamare got awarded for his contribution in various social work for the society at large he is doing since many years. He is Founder & President of Giants Group Of Pune Metro (a social group affiliated to Giants International, which is launched in Bombay in 1972. An Active and Social Service Oriented group under the leadership of Late Padmashri Nana Chudasama. Nana was the only one who was sheriff in the Mumbai for 2 years in a row).

Giants Group Of Pune Metro he did many projects like Save Girl Child, Blood Donation, Eye Donation, Tree Plantation, helping underprivileged students by giving them schoolbooks, school uniform and free tuition to the underprivileged students. He also helped old age home Nivara in Pune by spending 4 hours with them and doing empathic query of old age home residents at Nivara, when he came to know they have shortage of food grains, Shantanu provided them food grains as well as medical kit to take care of their health.

Shantanu Bhamare released various awareness videos for Indian Citizens at large during high peak Corona times which started in the country in March 2020. Shantanu took help of his strong Bollywood contacts, taken their video bytes which covers what Indian Citizens should do and what they shouldn’t do in Corona pandemic, also appealing Indian Citizens to follow guidelines laid down by the government.

Shantanu Bhamare veteran Software Professional & Leadership Guru turned into popular Indian film Producer, Model, and Actor who was born on June 12 th in Pune, Maharashtra, India. He has done debut in Hindi Feature Film RED.  He has played very significant role of a Jailer in Hindi Feature Film RED against very famous Kamlesh Sawant who is Drishyam fame worked with Ajay Devgan, worked with Amitabh Bachchan in Bhoothnath Returns, worked with Amitabh Bachchan in Khakee, etc. This significant role of a Jailer is portrayed by Shantanu is coming up as highlight of the film – RED !  Shantanu, being a stage & theatre artist was able to enact this powerful role of a jailer in front of veteran actor Kamlesh Sawant without any retake!

Other upcoming Hindi Feature Films Projects of Shantanu in which he is going to play significant role are:

It’s a way to go for Shantanu and we all praise and appreciate his talent, we all are sure is going to change outlook of the Bollywood!

It clearly indicates that Shantanu is a Rising Star in Bollywood (Hindi Film Industry) who is both Producer and an Actor and he is among discussions in Bollywood.

Actress Avneet Kaur will be judging the 2nd Season of NFMG...

From Quitting Full-Time Job to Starting Her Freelance Writing Journey –...