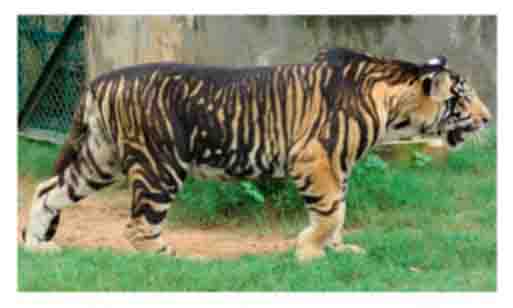 New Delhi, Oct 27: Similipal tiger reserve in Odisha has a unique feature. It is the only tiger reserve in the world where a subspecies of tigers called Pseudomelanistic tigers have been photographed. Pseudomelanistic tigers stand out from the rest of the tigers as the black stripes on their back are so wide that they almost overlap each other and seen from a distance the animals seem to be jet black.

The black tigers have been a matter of mystery. A number of questions remain unanswered about the animal such as what makes them the way they are? Is their presence unique to Similipal? Or are they present anywhere other than Similipal also but it is just that they haven’t been photographed outside of Similipal? A new study by a team of scientists drawn from several institutions both within and outside the country has now found some answers.

Such questions can be answered by studying the genetics of animals. But, conducting such studies is easier said than done particularly in the case of animals as elusive as tigers. One needs samples from well-identified individuals and obtaining samples from tigers in the wild with the confirmed identity of individuals is next to impossible.

A breakthrough came in 2014 when two pseudomelanistic tiger cubs were born in captivity at Nandankanan Biological Park in Bhubaneswar. The stroke of luck got strengthened when one year later one more pseudomelanistic cub was born to the same parents. A team of scientists from the National Centre for Biological Sciences (NCBS), Bengaluru, obtained samples from these captive tigers and analysed their DNA sequence.

They found that mutations in a gene called Taqpep were responsible for the different patterns of stripes in pseudomelanistic tigers. All pseudomelanistic tigers had a mutation in both copies of their Taqpep gene that they received from their mother and their father. Normal-looking tigers either did not have that mutation at all, or they had it on only one copy of the gene.

The researchers then collected non-invasive samples of wild tigers in the form of faecal urine, matter and saliva from animals hunted and partially eaten by tigers from Similipal and several other forest areas across India and found that the mutation was present only in Similipal tigers, nowhere else. Clearly, there was something going on in Similipal.

The study team has published a report on their work in Proceedings of the National Academy of Sciences (PNAS). (India Science Wire)

Ananya Birla participated in the discussion on “The Role of Youth Against Climate Change.”

Aimstorms Advertising has been awarded as outstanding digital innovations company in...

Here is how COVID-19 vaccination introduction training programs are conducted?

MOHANAD MOHAMMED HUSSEIN: The Genius Entrepreneur and Maestro Businessman is the...