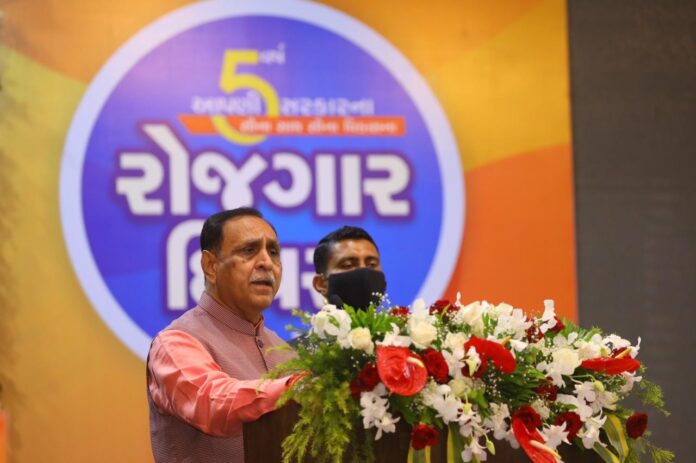 Gandhinagar, (Gujarat): Gujarat Government has provided government jobs to 3-lakh and provided job opportunities to 17-lakh by organising 2,088 Job Fairs in the state during the last five years, thanks to the government’s farsighted policies and programmes. This was stated by Chief Minister Vijay Rupani at a state-level function at the Platinum Hall at the Sarsana Convention Centre at Surat city to observe August 6 as Rojgar Divas to mark five years of good governance.

He congratulated over 62,000 youth who were issued appointment letters as teaching assistants, nurses and other posts in different cadres in different departments, statutory boards and corporations on the basis of selection at the Job Fairs organised by Labour and Employment Department across the state.

Speaking on the occasion, he said the state government’s innovative approach to make youth ‘jog-givers and not job-seekers’ created opportunities for them for global competition.He said the government’s other innovative ‘Learning with Earning’ helped over 2.30-lakh youth under the Mukhya Mantri Apprentice Yojna during the last two years.

He said the state government gives monthly stipend up to Rs. 5,000 to the apprentice students during the learning period to share the financial burden of the industry. No wonder if Gujarat has India’s largest share of 24 per cent of apprentices in the country.

Mr. Rupani said the waiting list of 10 per cent in the government jobs has been doubled to 20 per cent by amending the recruitment process for the talented candidates.

Even though many lost their job during the pandemic coronavirus, the Chief Minister said that government jobs helped many to tide over the crisis. The incumbent BJP Government has reversed the earlier governments’ ban on new recruitment.

Listing the achievements of last five years of SevaYagya of good governance, he said that by issuing appointment letters to 62,603 youth, including 11,503 for government jobs, they have been honoured.

Talking as Gujarat’s role as ‘job-giver’, he said that 25 lakh workers from other states domiciled in Gujarat earn their bread. The rising industrial and service sectors has made Gujarat a land of opportunities. The GIFT City in Gandhinagar developing as Global Financial and IT Hub and the modern Surat Diamond Bourse will create 1-lakh jobs each, with direct benefit to the talented youth.

Energy Minister Saurabhbhai Patel said that Gujarat provided maximum jobs in the country. With development growth has increased lifestyle of people and peace and happiness. Gujarat does what it promises. He said that 1.25-crore people are working in 30-lakh SMSE units in Gujarat. Nearly 2-lakh students are being trained at ITIs in the state, equipped with modern machinery to keep pace with the time that make the students employable.

BJP State President C.R. Patil said that 60 to 70 per cent of trains carrying migrant workers to their home states during the pandemic coronavirus confirm that Gujarat is Number One in providing jobs. The State Government’s timely subsidies to industries and infrastructure generated employment.

Quoting Union Labour and Employment Ministry’s ‘Employment Exchanges Statistics-2018’, Labour and Employment Principal Secretary Anju Sharma said that Gujarat tops in providing jobs. Gujarat has the lowest unemployment rate of 2.20 per cent. In all, 1,68,873 apprentices were recruited under the Mukhya Mantri Apprentice Yojna in the state.

After the success of ’21mu Tiffin’, the makers are gearing up...