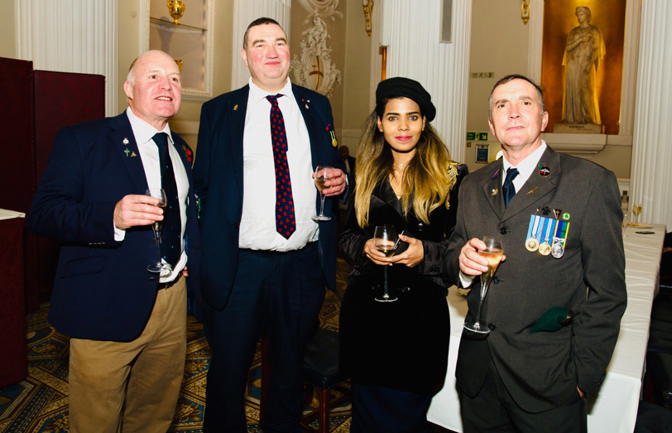 London: Sanjuna Madonakendi is an international artist was invited as a guest of Her Majesty’s Royal Marines Charity to attend the 50th Mountbatten Music Festival performed by the world-renowned Massed Bands of HM Royal Marines at the iconic Royal Albert Hall. Sanjuna, an experienced charity fundraiser offers her services for the very worthwhile cause and assists in fund raising from the assembled audience.

The Royal Marines, who do not need an introduction, are Her Majesty the Queen and UK’s elite amphibious fighting force. The military specialists that are on the most dangerous operations all over the world, showcase their softer side and incredibly talented officers at the  Mountbatten Festival of Music conducted on the 4th- 5th of March 2022. The festival sees musicianship and pageantry also featuring a wide range of musical styles, including music from the big screen and superb solo items, as well as the traditional marches and overtures that have proved such a hit with audiences over the years.

Commenting, Sanjuna said “I was delighted to be a part of this incredible music festival, a prestigious event in the Royal calendar operated by Richie Puttock and in the Platinum reigning year of Her Majesty Queen Elizabeth the second”

“I was a member of The Bharat Scouts and Guides (BSG) and served many years in my school days. I am also delighted to be now an Associate Member of the Royal Marines Family and the Charity, which offers lifelong support to the Marines family. I look forward to working with them again in future”

“It was a heart touching moment to see the royal marine band play a tribute to the Ukraine national anthem. My thoughts and prayers are with them during this difficult time” says Sanjuna.

In November 2021 Sanjuna was invited for the remembrance Sunday lunch hosted by the Lord Mayor of London Vincent Keaveny at the Mansion House She also participated in a tribute at the City of London Troops Memorial, to the British and Commonwealth military and civilian servicemen and women in the two World Wars and later conflicts. It is held on the second Sunday in November.

The Mountbatten festival began on the 6th February 1973 when the bands of the Royal Marines School of Music, Naval Home Command, HMS Ganges, and Commander-in-Chief were massed for a performance for the benefit of the Royal Academy of Music’s 150th Anniversary Appeal. These concerts display the outstanding versatility of some of the world’s finest military musicians and are given the “West End” treatment with spectacular lighting effects.

The year 2020 Prince Harry and Megan attended the festival at the Albert Hall. The event marks the 75th anniversary of the end of World War Two and the 80th anniversary of the formation of the British Commandos. The duke and duchess received a long round of applause from the audience as they took their seats in the royal box.

The Royal Marines operation manager Richie Puttock thanked Sanjuna Madonakendi in person for her presence and participation in fundraising for the Marines.

Parliament has passed the 3 farm bills for improving overall economic...

Actress Avneet Kaur will be judging the 2nd Season of NFMG...